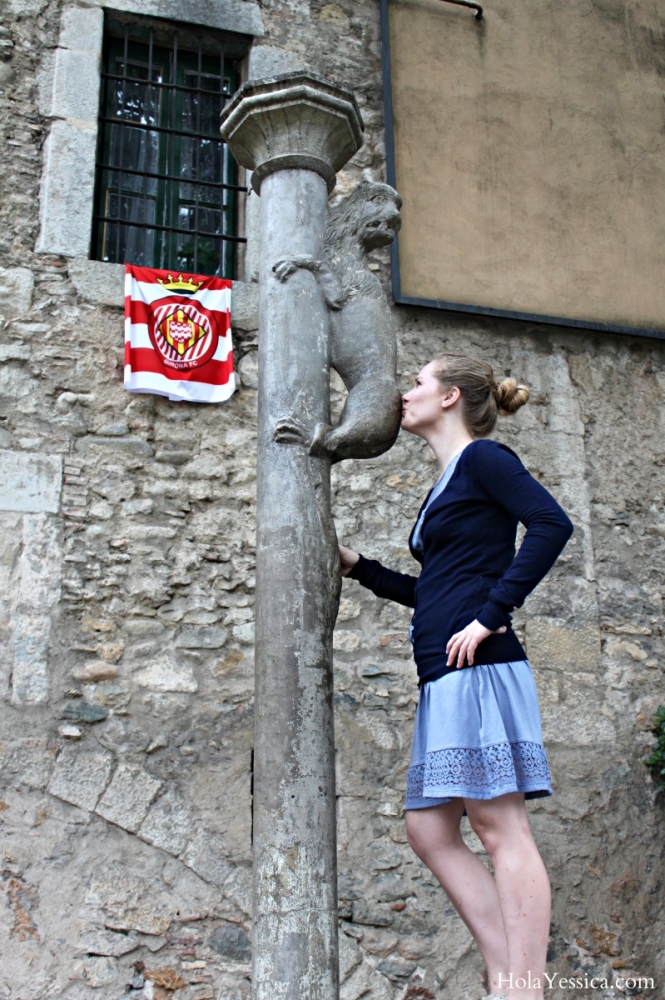 Girona is famous for lots of things – its extensive Jewish quarter, the cathedral’s medieval cloister, the lovely spring flower festival and the colorful houses lining the river. But one thing it doesn’t get enough credit for is all the kissing you can do there. Yep, Girona: the city where snogging gets strange.  Let’s talk about two famous Girona kissing legends.

Kiss Your Way to a Return Trip

If only return airline tickets were so easy to get! In Girona, all you have to do to guarantee a return trip is to find the lion and kiss its bum. Here’s the official message: for the Lleona de Girona:

“Whoever kisses the lioness’s ass will return to Girona.”

It also used to be a way to officially declare your respect and love for the city of Girona, and a fun way to recognize your status as a “gironí.”

The Lleona is in the Plaça de Sant Feliu. Jump up the specially-placed steps to get into prime bum-kissing position, and plant a kiss on it if you want a trip back to Girona. Hey, it worked for me! I’ve been back twice.

But if you’re in Girona and don’t fancy a return trip, there’s one more thing you can kiss in exchange for something nice…

Kiss Your Way to Good Luck

Up on the steps between the Arabic baths and the cathedral is a funny statue of a chubby woman with big wings. If you get close to her looming tum, you’ll see this sign:

“Whoever kisses the Majordoma’s belly will have a year of good life.”

Who is the Majordoma? She was a fat, smug, gossipy woman, the Majordoma came to Girona with her great nephew. Sant Narcís (Girona’s patron saint). She was a great cook and invented some classic Gironan recipes, like  oca amb peres (goose with pears), pomes farcides (stuffed apples), and  botifarra de sang (blood sausage).

The Majordoma also knew a bit of witchcraft-y stuff, so she combined her powers and came up with a new recipe that filled all the churches in Girona with cobwebs, complete with giant spiders, whenever she got angry. But losing your temper seemed to run in the family. She upset her Sant Narcís, who took away her powers and turned her into the laughingstock of the city.

She redeemed herself after having a premonition of Narcís’ death that came true. Afterwards, she decided to dedicate the rest of her life to taking care of the sick and disabled. Just before she died, she built a huge fire in front of the cathedral and cooked  mint soup to feed the poor and hungry. When she died, the Gironan people were surprised that her huge body weighed less than a sparrow.

Weird story, eh? Actually, the story of Sant Narcís is interesting too, but I’ll save that for another time. The short version of it is, kiss the Majordoma of Girona’s belly, and you’re in for a good year.

I recently gave her panza a peck, so we’ll see if it comes true (fingers crossed!)

Have you ever heard of other kissing legends? Which would you rather have – a guaranteed return trip to Girona, or a guaranteed good year?

P.S. I will be writing about my recent trip to the Basque Country soon, but I don’t really fancy sitting inside and blog when there are beaches, rebajas (sales), and all-night summer parties to be enjoyed! I love summer.