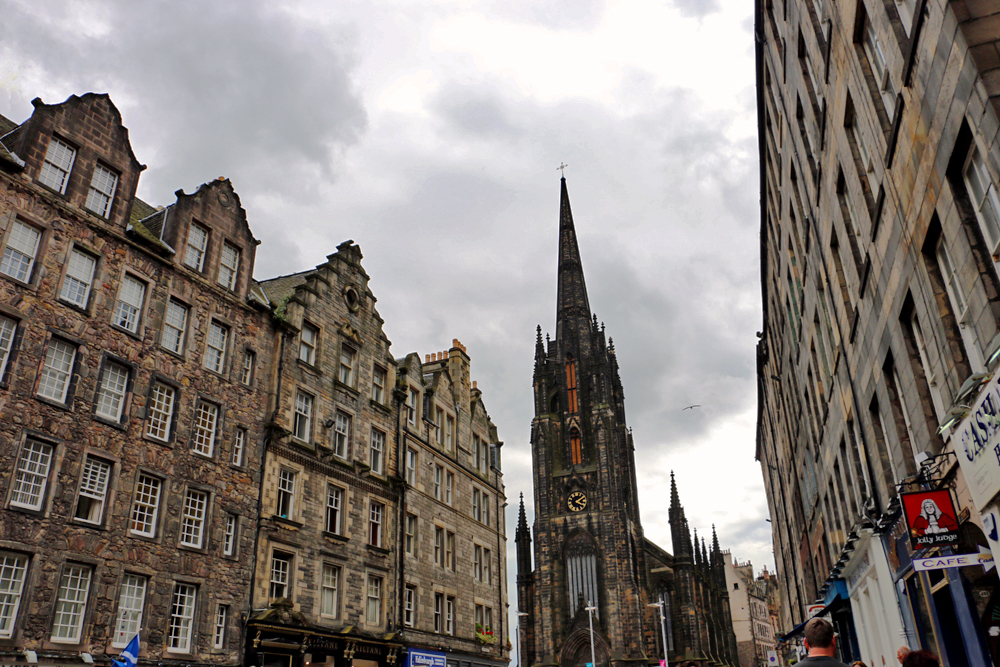 No gimmicks – that was my main criteria for choosing a tour to get to know the creepy side of Edinburgh. I didn’t want out-of-work actors in gory costumes leaping out at me and shrieking; I wanted to legitimately get to know the historical part of the city that’s inspired so many scary stories over the years.

So my heart sank when I got to the meeting point for my nighttime tour with Viator and found a grinning man covered in fake blood, grey zombie makeup and sporting an old-fashioned suit while theatrically making a series of jokes to the crowd. He finally paused his patter before dramatically turning towards me.

“Hello! Where’s your boyfriend?” he asked with a huge fake grin on his face as I approached. I internally sighed but played along, “I’ve not got one.”

His plastered-on grin got even bigger as he spotted the chance for a joke. “Oooh! Ladies and gentlemen, please excuse me, the tour is cancelled for the evening” he replied, and pretended to escort me off by the elbow.

But when he finally got around to asking for my reservation, it turned out I wasn’t on his tour at all. Behind the costumed theatrics was a different tour group – and nobody was in costume, shrieking, or making cheesy jokes.

It’s easy to see why Edinburgh is the setting for so many spooky tales and legends. There’s a near-constant wind whipping into the city. Sometimes it’s a gentle breeze, like a little laughing creature dancing in and out of the streets. Other times you can hear it howling through the tiny closes, every so often mischievously scattering someone’s papers or sweeping their hair across their face to temporarily blind them.

On the very worst days the wind roars so hard it feels like an invisible monster chasing and pushing you around so the city can devour you, blowing you off your balance into a stream of traffic or off the rocky cliff of a hillside.

The city center is covered in sandy church towers blackened by centuries of simply existing in such a harsh, windy climate. Late at night, the tall buildings cast long shadows on narrow cobblestoned streets, filling them with pools of shadows. And it’s not uncommon to stumble upon a graveyard filled with looming tombstones.

They say you’re never more than five feet from a buried body if you’re walking around Edinburgh.

You really don’t need any gimmicks to make the Scottish capital seem like a creepy place. It does a fine job on its own.

Scotland has long been home to plenty of storytelling and legends. There are all kinds of fantastical creatures in Scottish folklore, like the brownies that clean your room if you’re nice (but will burn down your house if you take them for granted) and redcaps, who get their name from their hats they keep red by regularly dipping them in fresh human blood.

Then there are the giants who supposedly roamed the north of Britain, one of who gave his name to the peak of the ancient volcano that overlooks Edinburgh – Arthur’s Seat.

There’s no shortage of great stories here, and there’s actually a historical reason for that. Scotland was one of the last places to receive the written word, so stories were passed on verbally.

That’s just the fairytale stuff though. Bloodthirsty redcaps might be creepy, but what’s much scarier in Edinburgh are the real people who have done some pretty horrific things here throughout the years.

Those aren’t just characters in the spooky fictional stories that have come out of Edinburgh. Those are all real people who have lived here.

OK, so the vampire is only somebody who thinks he’s a vampire, but he did do some real-life bloodsucking. And of course, the “witches” were just ordinary people somebody important didn’t like the look of. They got burned at the stake anyway.

The cannibals and grave robbers, though, are exactly what they sound like – or perhaps even more horrific.The most notorious cannibals were a 48-strong family who attacked lonely travelers in the night and devoured them.

Grave robbers did a roaring trade in Edinburgh for years, thanks to the city’s universities’ strong medical and anatomy  programs. Legally, the students and doctors were actually allowed to use some bodies – so long as they belonged to executed criminals. But that only gave them about 5-6 bodies a year, so doctors started buying up bodies at alluringly high prices.

The grave robbers adapted to the new situation too; they re-branded themselves as “resurrectionists” and got to work digging up bodies.

Some went a step further, making some bodies of their own by killing off people unlucky enough to cross their paths. The most famous of them are Burke and Hare, who were eventually caught after killing 16 people.

Burke was convicted and hanged, while Hare got off in exchange for testifying against Burke. You can still visit Burke’s remains today – ironically, in the Edinburgh Medical School’s Anatomy Museum.

Still, the resurrectionists did lead to two big changes in laws. First, people like Burke and Hare convinced courts to increase the legal number of cadavers medical schools received to study. And second, the resurrectionists in one Edinburgh graveyard once found that the corpse they’d dug up wasn’t very dead; she’d been buried alive. (This wasn’t uncommon; about 30% of the graves in one of Edinburgh’s old graveyards contain people who had been buried alive). So the law was changed, and now you had to check someone’s pulse before burying them.

Hundreds of years later, people still like to visit the graveyards where all of this morbid stuff went down.

Actually, visiting a graveyard isn’t a weird thing to do in Edinburgh at all today. You can follow in the footsteps of literary greats like Charles Dickens and J.K. Rowling, who both got inspiration for some of their character’s names by wandering around graveyards. Ebenezer Scrooge and Tom Riddle’s names have both been lifted from Edinburgh gravestones.

The vampire I mentioned above? That happened in 2002. The anatomy and medical schools are still going strong (although now they’ve got legally obtained cadavers to work with). The graveyards are full of curious visitors eager to catch glimpses of the final resting places of people’s names who inspired great works of literature.

Other people go hoping to spot some of the supernatural goings-on that some still claim to see today. Scotland’s storytelling tradition is holding strong.

Just try walking through the old city at night to see for yourself. Make your way along the narrow cobblestoned streets and wander in and out of shadows cast by thin, tall buildings looming overhead.

The Royal Mile’s buildings get lit up in bewitching purples and greens, and large black shadows of birds swoop in and out of the streetlights. Sudden cackles of laughter ring out as bar-hoppers spill out onto the streets from the pubs.

And maybe you’ll hear that haunting, whispering Edinburgh wind following you, lurking just behind you in the shadows.

I was a guest on the Edinburgh Haunted Walking Tour: Mysteries, Murder and Legends with Viator. This is a 2-hour nighttime walking tour of Edinburgh. All my opinions are honest (as always!), so here’s what I liked and didn’t like about the tour:

Positives: it’s not gimmicky, it’s budget-friendly (clocking in at $10, plus optional tips), the tour guide was very friendly and entertaining, and it’s full of great stories and storytelling. It also includes a lot of detail about Scottish legends and culture.

Do go for a drink with the tour guide afterward, as it’s a great chance to hear even more about Edinburgh/Scotland and to meet fellow travelers.

Negatives: none! I really enjoyed this and thought it was an awesome way to spend an evening. But wrap up warm, because even in late May it was a bone-chilling 5 degrees outside, and windy too.

Would I recommend this? Yes, definitely! This is one of my favorite tours I’ve been on.