Panic in the Hills of Edinburgh 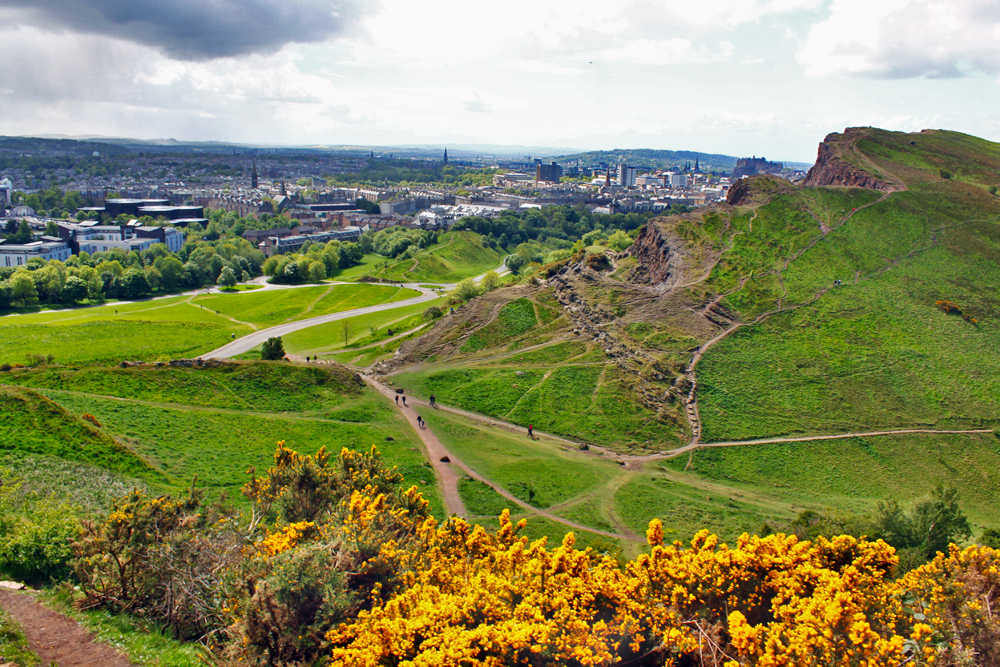 Or, you can take the girl out of the city…

Edinburgh’s wind is famous for its almost constant presence in the city. Sometimes it’s a light breeze gently dancing its way around the narrow closes and stony buildings, whistling happily along.

But at other times it’s a harsh, violent wind that snarls around the city and cuts you to the bone.

This particular day, we got the second kind of wind.

But this day was also the third day in a row I’d been putting off climbing up to Arthur’s Seat, the ancient volcano that rewards the people who scale it with spectacular views of Edinburgh.

Rather than slogging my way up, I’d spent a couple of days lazing around in my friend’s flat, gazing out the windows that looked directly onto the hillside.

Every so often, I caught a glimpse of people powering their way to the top. The slow but steady stream of hikers was rather soothing to watch. I felt a vicarious sense of satisfaction as the tiny black silhouettes in the distance made it all the way to the peak and raised their hands in victory.

Still, I was starting to feel vaguely guilty about literally lying in bed eating chocolate biscuits and drinking endless cups of tea while I watched other people work hard.

When Sunday rolled around, my friends went off to go run relay marathons while I snoozed. (I was quite shocked when I found out they’d voluntarily paid to go running for hours on a Sunday morning).

By the time I finally rolled out of bed, I saw that stream of little silhouetted hikers determinedly making their way up the hill.

The combination of the two events made my vague sense of guilt morph into full-blown shame. So after one last cup of tea, off I went to take on the hill myself.

That’s it in the background!

Now, I really should have known from the beginning that I wasn’t very well-prepared. Right away, it was clear that everybody else on the trail was wearing sensible hiking shoes and bundled up in serious sporty clothing.

Meanwhile, I’d worn my city-stomping boots with a tiny heel and a flouncy wool coat with sparkly gold buttons. That should have been the first sign something was up.

But my friend said it only took half an hour to do the walk, and the last time she’d gone, she’d been shocked at how quickly she’d gotten back to her apartment. It certainly didn’t look very hard from where I was relaxing in her flat.

As my friend promised, it really doesn’t take too long – maybe 20 minutes – and there are some fantastic views. To get up, you have to hike up a twisting set of stone steps.

The path up is steep and a bit rocky, but I’m in reasonably good shape. I was perfectly warm and comfortable for a hike. I was breathing hard as I got towards the top, but it wasn’t a tough hike.

Or rather, it shouldn’t have been a tough hike. But naturally, I’d picked the worst possible day to venture up the hill.

As I neared the top, the Edinburgh wind whipped up into a frenzy.

It howled around the top of the hillside so hard that I literally could not stand up. My ears rang in pain as the freezing wind blasted directly into them. The wind was ever fiercer here, forcing me to one side of the hill, seemingly trying to push me over the edge.

But I hadn’t gotten out of my cozy nest of tea and treats to give up now. I pushed back harder, and found myself scrambling up a rocky path to get to the very top.

The views were, indeed, spectacular.

Or at least, they seemed fairly nice in the brief glimpses I got between squinting my eyes shut to protect them from the clouds of dust being flung up into the air.

I tried taking a few pictures, but every time I held my Canon up, the wind was so strong that it forced the camera back towards my body.

At one point, I literally could not stand up without clinging onto something. So I sat down behind a big rock and waited. At one point, I tried to get up and was firmly pushed back on the ground by the wind.

Finally, the wind died down enough that I could stand. I started picking my way among the rocky top to get down as soon as possible.

Suddenly, a vicious gust of wind knocked me off my balance, and the tiny heel on my silly little boots got caught on a rock. My ankle twisted and I stumbled. As I tried to get back up, I realized I couldn’t put any weight on my ankle.

I was alone, getting buffeted every which way by the wind, and in pain. How on earth was I going to make it down?

(Er, I should mention I’m not much of an outdoorsy type, though it may hardly be necessary at this point!).

Once my initial panic subsided, it wasn’t nearly as bad of a twist as I’d expected. My ankle definitely hurt, but I could walk, and I just wanted to get off the hill as soon as possible.

I started off back down, crouching down low so I couldn’t get blown off balance. I used all fours to scoot my way down the peak. On flatter sections of the trail I ran, getting pushed to one side by the wind and with my hair streaming across my face so I couldn’t see. I didn’t care – I only wanted to be back inside.

Then I got to the little rocky trail of steps. My feet slipped and skidded on the stones on the narrow trail, and the wind buffeted me so hard I really thought I was going to get blown straight off the hillside. I had to stop and sit down, clinging once again to the biggest rock I could find.

As I sat, freezing cold and more than a little worried, I looked longingly at the towers of the city below – and a little lightbulb went off inside my head.

It suddenly became crystal clear to me why I hardly ever ventured out into nature, and why that was an excellent rule to live by.

Eventually, I managed to get to a section that was more protected from the wind, and rushed down as quickly as I possibly could. My whole body hurt from the wind – especially my ears and lips. As I passed a few hikers making their way up the trail, they looked completely at ease, like they did this every day. I knew I didn’t look anything even close to “at ease”.

When I finally got my little urbanite self back to street level, I stopped being so frazzled and had time to think. That’s when I realized this hike had combined pretty much everything I try to avoid:

2) Being inappropriately dressed for the occasion (ha)

3) Being more than ten minutes’ walk away from a cup of tea.

When I wrote this piece from my friend’s bed, watching the late afternoon hikers making their way up the hill as I was tucked up safely away from the wind, all those vague feelings of guilt had gone.

“Better them than me,” I laughed to myself, feeling relieved as I wrapped my hands around a warm cup of tea – and reached for an extra chocolate biscuit to go with it.

It really doesn’t look so bad when you’re back on street level. But I swear, it was terrifying!

Postscript: The evening after my hiking adventure to Arthur’s Seat, I did a ghost tour of Edinburgh. Walking around graveyards in the middle of the night hearing scary stories was approximately a million times less frightening than walking up that dratted hill.

The views are nice, though.