Pretending to be in Game of Thrones in Canet de Mar 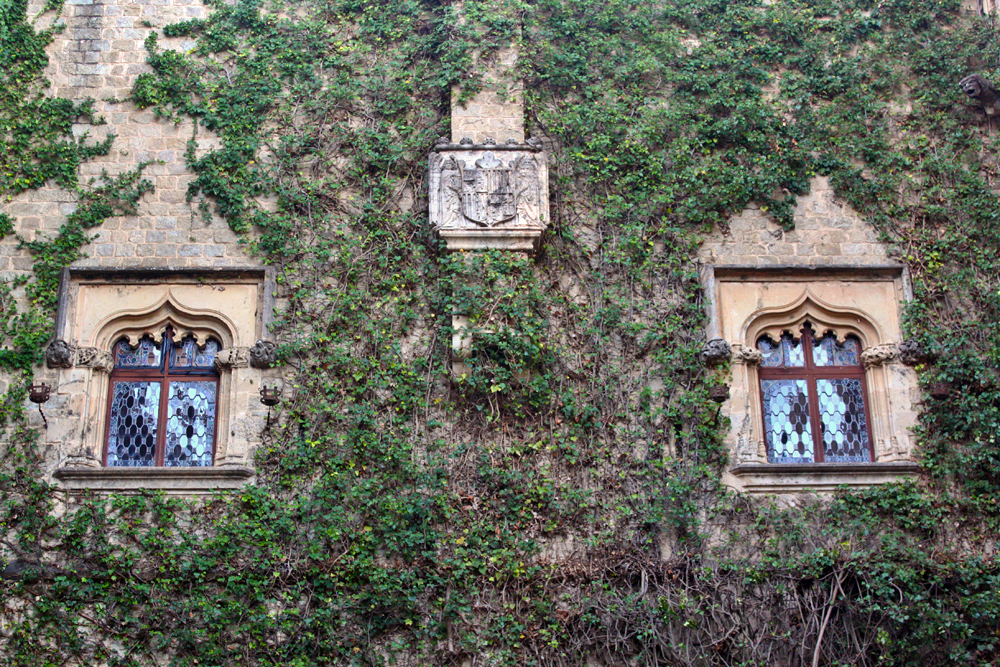 Over the past year or so, people all over Spain have been feeling proud that their country has been chosen as one of the filming locations for Game of Thrones. They’ve been filming all over, from the Alcázar of Sevilla in the southwestern corner of Spain to pretty little Girona near the French border in the northeast.

And now, there’s one more place to add to the list of filming locations – Canet de Mar.

Canet de Mar is about an hour’s train ride north of Barcelona. It’s a beachside town mostly known for  being the summer home of architect Lluís Domenech i Montaner. He’s the guy who did the Palau de la Música Catalana and the Hospital de Sant Pau – in other words,  the guy everyone would be talking about if it weren’t for Gaudí.

You can visit Domenech i Montaner’s former summer house and studio to see some of the pieces he worked on throughout his career. There are a handful of lovely modernist buildings and pretty churches scattered throughout the town as well.

But now there’s a new reason for people to visit Canet de Mar – and that’s because it was used as setting for the Tarly family’s house in the upcoming sixth season of Game of Thrones.

The specific location used is the Castell de Santa Florentina, a place where you can see a medieval castle and a modernist work in the same structure.

Here’s how that happened. It started as a castle built in the 11th century atop the remains of a Roman villa. Some of those remains are actually still part of the building today.

By the 16th century, the castle had been passed down to the Montaner family, and in the early 1900s the then-current owner, Ramon Montaener i Vila, decided to have the castle renovated by his nephew – none other than Lluís Domench i Montaner. Lluís added both Gothic style elements and modernist ones in the expansion project.

Today, the castle is used for all sorts of things, from corporate events to weddings to guided tours. You can tour the building yourself, or perhaps attend for the annual classic music festival held on the castle grounds in the summer.

And, of course, it’s also used as a filming location! The location scouts for Game of Thrones chose it as the perfect setting for the Tarly family’s house.

The upstairs living room in the castle was used for weeks of filming, though many of the intricate modernist details had to be covered up, of course (like the stained glass windows). The castle tour guide said she wasn’t 100% sure if she’d recognize the castle on the series because of how much the film crew had covered it up!

She was clearly really excited to have been privy to such an exciting filming event though, as she had a gleeful smile on her face when she talked about the shooting she’d gotten to see.

The people of Canet de Mar were also beyond thrilled their town was selected to be in the show. That’s why they put on a “Festa de Trons” (Festival of Thrones) to celebrate the honor.

The town’s main street was filled with stalls selling all sorts of Game of Thrones-related objects, from hand-crafted wooden swords for children to T-shirts to artwork. One stall even sold a selection of cookies that were inspired by the warring families in the series. Local rumor has it in the town that John Bradley-West, the actor who plays Samwell Tarly, enjoyed quite a few of them!

When it came time for the costume contest, the locals pulled out all the stops. A Jon Snow lookalike showed up with his own direwolf (who got a giant applause), and a whole family joined in on the dressing up fun together. My personal favorite was the guy who brought his little son dressed up as Tyrion Lannister (the dwarf).

The Gatzara restaurant got into the spirit with a special Game of Thrones menu, which had courses like the “Sansa Salad”. It  was all beautifully presented and incredibly tasty!

Thank you to the Ajutament of Canet de Mar for inviting me to enjoy the Festa de Trons. I had a wonderful day out!

P.S. You can read more about Game of Thrones filming locations in Spain here.