Prague: It Really is Absurdly Beautiful 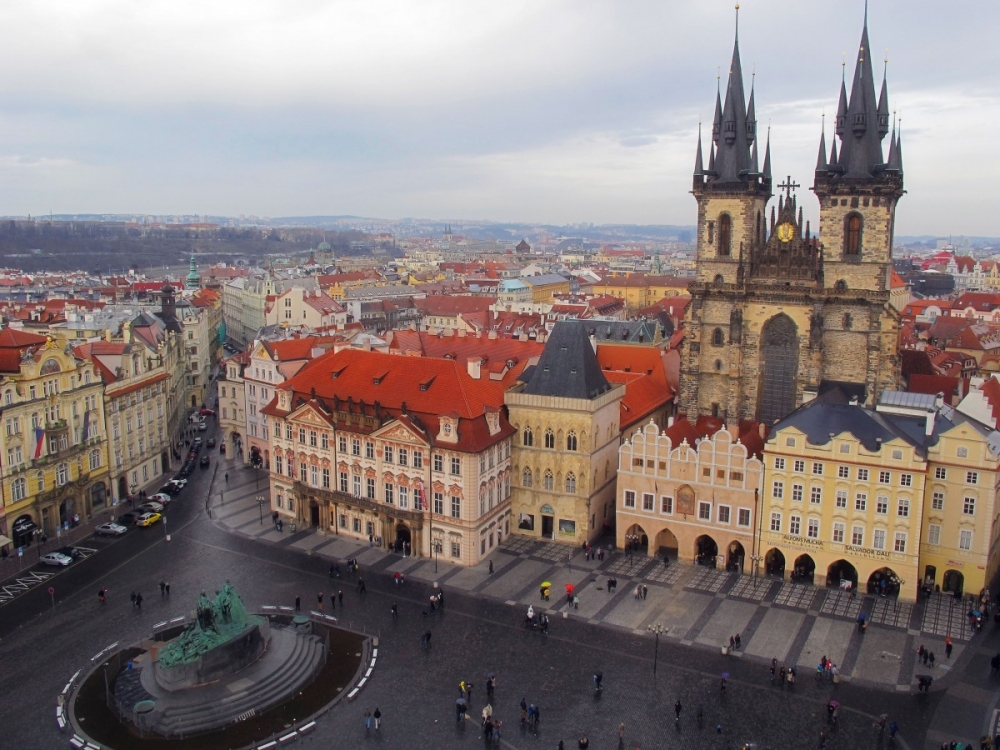 Five minutes into my first-ever stroll around Prague, I was totally captivated by the little red trams whizzing around, the deep blue of the Vltava River, the beautiful Art Nouveau apartments, and the promises of fairytale castles in the tips of the towers poking out of the tightly packed buildings.

I was already in love with Prague, but I hadn’t seen anything yet.

I hadn’t even seen…

This square pretty much tells the history of Prague if you go round the buildings in a circle, as they sprouted up over the centuries to host key events. It’s a great place to start off a visit to the city, and it’s gorgeous from every angle. I was instantly impressed with all the colorful, elegant buildings.

This is one of the things I’d seen a lot of in photos of Prague, but it still didn’t prepare me for how pretty it is in person. OK, I’m a bit of a magpie, so anything glittery and gold will almost automatically get a thumbs-up from me. But I was surprised at how intricate and detailed the clock was. It can tell you the time, the season, the astrological sign, the saint’s day, what time the sun will set, and more. And on the hour during the day there’s a little show that’s worth sticking around for. Don’t forget to look up!

The views from the top of the Old Town City Hall

I was skeptical when I heard that you had to go up to the City Hall for good views of Prague. After all, you get great views of the main square while you’re down in it, and views up by the castle are stunning. Even with that being true, the 360° perspective on all of Prague from a tiny tower right in the center is truly special. I went up just before sunset, and wispy golden pink-tinged clouds gently swept in and gave the city a beautiful glow.

The stained glass in the St. Vitus Cathedral

Stained glass is one of those things I just don’t think will ever get old for me. Even after living in Europe for a couple years, seeing the sun shining through little rainbow-colored glass panels still fascinates me. The church itself isn’t too bad either, but my favorite feature was the huge stained glass rose window.

Chances are if you look up Prague, images of an old gray bridge will be included in the top lists. This bridge connects the two halves of the city, and even though it’s usually jam-packed with tourists, there’s no denying that it’s lovely. It’s dotted with sculptures of religious and royal figures, and as you enter the arch on the far end of the bridge into the Lesser Town, it’s honestly almost like you’re going into a theme park – it’s just that perfect. If you’re going to pose for a “typical tourist” shot in Prague, the Charles Bridge is a great place to do it!

Wandering around the winding cobblestoned streets definitely helps you work up an appetite, and if you’re in the city center you’ll almost certainly spot little stands selling swirls of golden flaky pastry. These are trdelnik, and they are just as delicious as they look. It’s a bit like a cross between a croissant and a Mexican churro, with soft layers of buttery pastry and topped with cinnamon sugar. You can also get them filled with things like jam or Nutella, although they are plenty sweet enough on their own.

The expansive views from the Prague Castle

Walking up to the castle is decidedly a bit of a hike, but once I saw the views from the top I’d decided it was worth it. The biggest ancient castle in the world gives you a wonderful view of the old city of Prague set against the river, and it lets you see just how neatly packed in all the little buildings are in the city center.

The bizarre sculptures by David Černý

Wandering around such a pretty little city, you’ll occasionally spot a rather odd-looking sculpture, like a trio of giant babies, a couple of naked men peeing into a fountain, or a saint riding a dead upside-down horse on its stomach. These are thanks to David Černý, a Czech sculptor who’s famous for attracting controversy with his art. A lot of the ones I found in Prague were an unusual mix of realistic figures either doing strange things or with some details purposely different. Whether you like them or not (and I did!) they do add a fun twist to a walking tour of the city.

Frank Gehry has done some amazing work that I’ve been lucky enough to see (like the Fish in Barcelona or the Guggenheim in Bilbao), but the Dancing House may just be my favorite. The curving building really does look like it’s dancing, and it’s great fun to walk around the outside and check out how it looks from different angles. While it definitely doesn’t blend in with the elegant Baroque and Art Nouveau buildings that surround it, it fits in quite nicely.

I mean, after seeing all this, how could you not fall totally in love with Prague? This was one of those rare travel instances in where a place really is as beautiful as it looks in photos, perhaps even more. When people say Prague looks like a fairytale, they aren’t joking. Actually, Prague is so uniformly gorgeous that it reminded me of Disneyland in lots of ways; obviously it is WAY nicer and more fascinating, but there was something in my mind that just couldn’t comprehend that such a perfectly beautiful place was real.

What’s the prettiest place you’ve ever been?