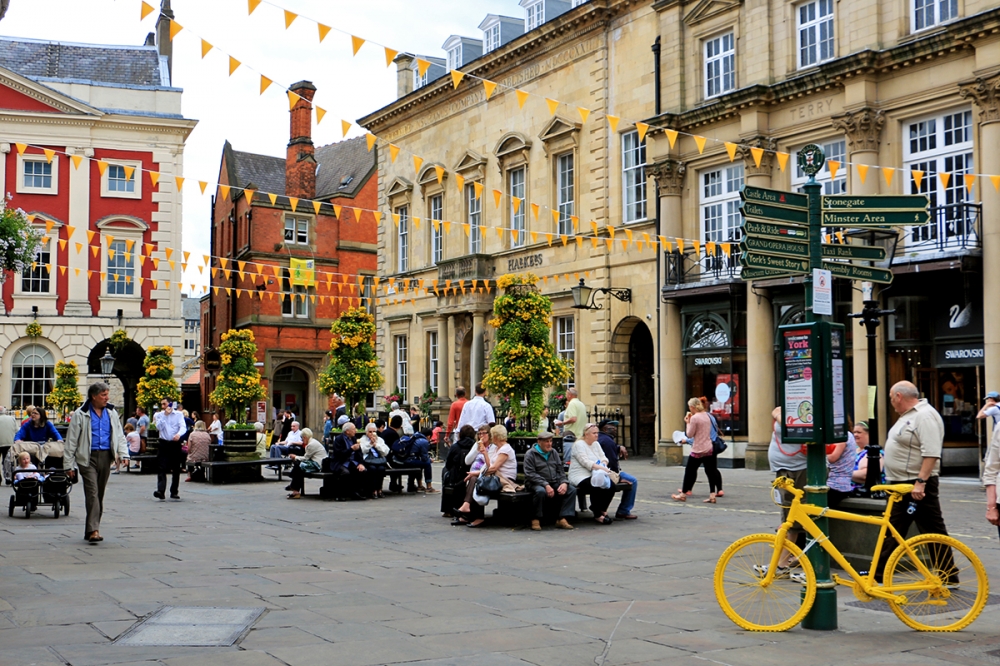 Right now, all over the north of England, the whole Yorkshire region has been coated with golden-yellow paint. At least that’s what it looks like as you drive through, because practically everywhere is brimming with decorations for the Tour de France.

OK, now here comes the obvious question – why is England so excited about a French bike thing? This year, the Tour de France is kicking off  in Yorkshire!

Next question: how are they going to bike from England to France? Unless they have aquatic bikes, this firmly falls under the category of what I call “cheating”. You can’t really call it the same race if you pack up your bike and fly over to another country, can you? (Le Tour may disagree with me on this one).

Anyway, Yorkshire is covered in bright yellow bike decor for the big day, and one of the most exuberantly golden cities is definitely pretty little York. They’ve thrown yellow bunting on just about everything that stands still, and they’re also hosting  a 100-day Grand Départ Cultural Festival.

York is one of those places that’s so uniformly pretty that you can hardly believe it’s real. Of course, like other cities that are easy on the eye, that means it’s also fairly full of visitors at any given time. Even on a Wednesday afternoon, there were tons of people milling about the picturesque streets, and it’s surely going to get even more crowded as Le Tour frenzy grows.  It’s actually going to pass through York itself for Stage 2, which kicks off in York and ends in Sheffield.

Naturally, the entire city is having a collective outpouring of  bike-related creativity. The shops and streets are all lined with increasingly innovative ways to stick a bike picture on anything. (Extra points if it’s yellow as well). Say you fancy a little something sweet. Head on over to Bettys for fondant fancies with mini bicycles delicately piped on top.

(Also, it turns out Bettys does a deal where you can get tickets to York Minster and then a champagne afternoon tea. This is a genius idea, as tourism and champagne aren’t combined nearly enough for my liking).

Or if you’re souvenir shopping, the Yorkshire Soap Company has a selection of quirky cupcake-shaped soaps with bikes and French flags perched on top:

Picking up a few things to decorate your house with? Don’t miss the real bike painted Tour de France yellow suspended above Fraser and May:

Are you more of a night on the town kind of person? Mansion Nightclub has a special new sign above the door:

If you just want to have a pint at the pub, you’ll still be bombarded with yellow flowers and bunting, as seen here at the ridiculously named The Slug and Lettuce (even though British food has a reputation for being terrible, I don’t think they actually serve slugs):

Even the church has joined in on the fun, temporarily nicknaming the building “Le Belfrey”:

Not to be outdone, neighboring city Harrogate has whipped up 22,000 hand-knitted mini yellow jumpers that are decorating all the shop windows in the surrounding area. Everywhere from the chippy to the funeral home has a line of tiny golden sweaters happily strung across the door (yes, the funeral home).

We  had a great time driving through Yorkshire and spotting all the slightly silly decorations for the Tour. It’s all in good fun, and you can definitely tell that people are having a great time getting into the spirit of things.

Even this happy devil!

It all kicks off on Saturday, July 5 (the Le Tour Yorkshire helpfully has a countdown to the second on the site) in Leeds, with a route taking cyclists through places with names that sound like they’re from a children’s book, like Buttertubs Pass. They’ll wind up and down the Dales and finish up in Harrogate (the knitted sweaters place).

Then on Sunday, York gets its turn. I really wish I could be there to see the crowds, as I’m sure there are going to be quite a few ridiculous yellow outfits around!

One of my favorite things about traveling is arriving somewhere and finding out that a special event like the Tour de Yorkshire is taking place. It’s great to see how something special is celebrated. In York, the answer is with lots and lots of bunting!

Oh, and here’s another discovery I made during my trip to York: different colored jerseys mean different things for the Tour de France. Shocking, I know!

The yellow is for the lowest total time, and it’s updated after every stage. The green one is for the most consistent finisher. The white one with red polka dots means that rider is the best climber on the hilly stages. And the plain white jersey goes to the best young rider (that means under 25 – so I am still officially young!).

York is one of my favorite places I’ve been in England, and it was a real treat to see it all dressed up for the Tour de France. I’ve caught the Tour de Yorkshire fever too, and this is the first year that I’ll be watching the race. I can’t wait to see it!

And by the way, good luck to all those cyclists going up and down the Yorkshire Dales. Our beast of a rental car could barely grumble up some of those hills! I won’t be surprised if some of them give up halfway through and start sliding backwards down the dales towards the nearest pub.

They should watch out for sheep on the dales too!

Will you be watching Le Tour de Yorkshire? Have you ever come across a surprise celebration on your travels?